SALT on alcoholism and bonded labour in participatory action research 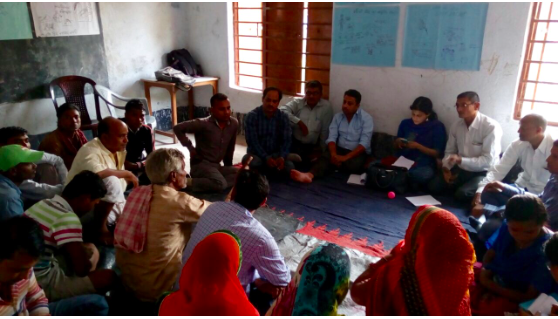 Pauline Oosterhoff & Rituu B. Nanda published an article in the Educational Action Research International Journal. They describe how SALT was used with participatory action research to respond to bonded labour and to alcohol abuse in the state of Bihar, India, where all alcohol consumption is stigmatised and illegal.

Action research “requires that participants trust that they have a right to speak and be heard, which is rare in communities living with bondage and trafficking”. Two matters needed to be discussed:(1) Non-violence and inclusion. Initially, women excluded men who depreciated the action research and the local NGO, and they engaged in verbal and physical abuse to defend the process. (2) “‘Project syndrome’, the tendency of locals to treat researchers as potential financial donors.”“To strengthen the trust between the NGOs and the community in Bihar” and “to provide some tools to structure discussions in a volatile context”, the team used SALT-CLCP.

“Men reluctantly agreed that to realise the vision of the village they wanted, something needed to be done about the drinking. Women agreed that slapping men might feel good but was unlikely to motivate them or to result in a happier family or community life.”

“The environment in the village has improved. People used to drink and fight in the evenings. Now, the fights have reduced.” – Woman resident, Bihar

“Action research groups have been successful in reducing the supply of alcohol by closing down illegal shops and/or limiting opening hours.”

(1) A fundamental question is “when medical and public health evidence must be taken into account”, and “how much weight this expertise should carry in comparison to local expertise and evidence”. For example: “We ultimately decided to provide participants with medical research about the importance of family involvement in alcohol addiction treatment all over the world, including in India (Nattala et al. 2010).” “We think that the people in the communities and the NGO have a right to information on harm reduction that could give them more choice on dealing more effectively and humanely with alcohol abuse than prohibition.”

(2) Discussing security with participants at a time of prohibition and stigma. Ethics, responsibility and courage in action research on a complex issue. As local communities “repeatedly expressed their determination to take risks to reduce excessive alcohol consumption”, “they [researchers] should not be paralysed by a sense of culpability in situations where they in fact lack authority or power.”

(3) Community people sharing what historically happened to tackle lack of knowledge leading to blame. “We decided to take on the people who sell alcohol, and not the people who drink it. Now we have a good relationship with the alcoholics.” – Male community resident, Bihar.

(4) Allowing action on the community’s priority issues strengthens the community’s confidence. As local communities “repeatedly expressed their determination to take risks to reduce excessive alcohol consumption”, “they [researchers]should not be paralysed by a sense of culpability in situations where they in fact lack authority or power.”

(6) Level of engagement and the effect on ownership of the research. “Representatives from the communities were involved from the design phase to data collection and analysis and action.”

(7) Evidence-gathering leading to knowledge democratisation. “The data collected in both states indicated high amount of household expenditure on alcohol compared to other expenses and motivated action.”