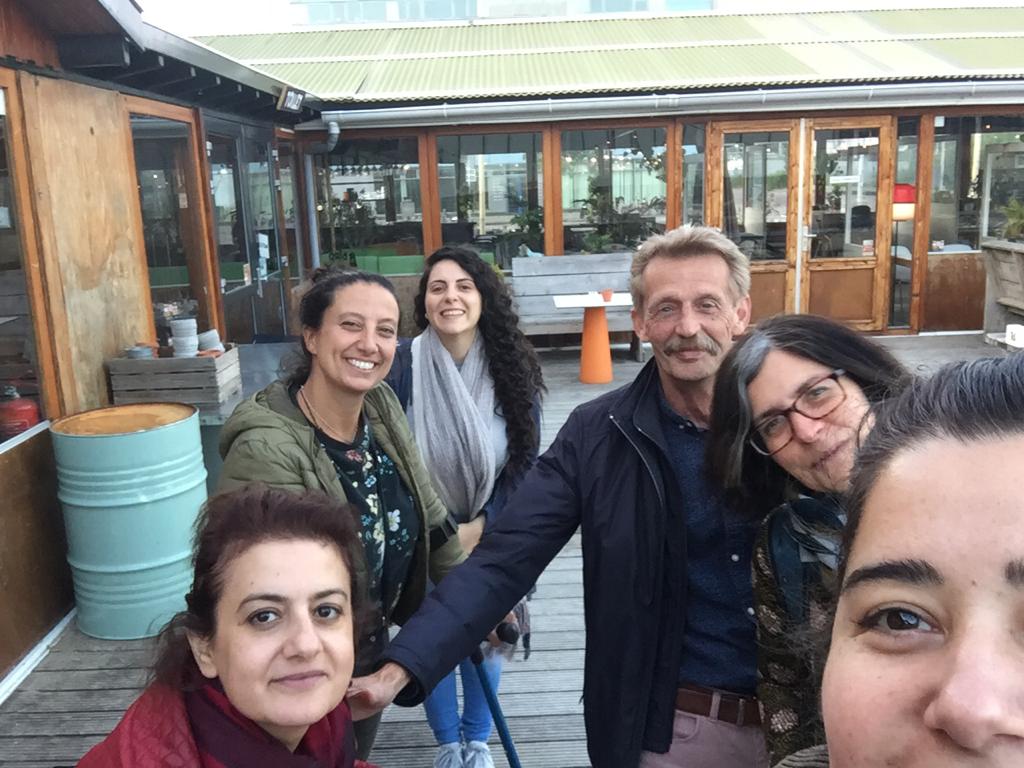 In small groups, the participants in the Amsterdam facilitators training organised three SALT visits to learn from local communities. Visits were made during and after the COVID-19 lockdown in The Netherlands. Two of the SALT visits were video calls and one was an on-site visit. What do all of the hosts of these locations have in common? They believe in their dreams and they persevere.

During the online video call sessions, all these learnings were shared with the other trainees of the SALT program, after which they have shared the need to continue the inspiration sessions by organising more SALT visits in the coming months.

“If I am not in the world simply to adapt to it, but rather transform it, and if it is not possible to change the world without a certain dream or vision for it, I must make use of every possibility there is not only to speak about my utopia, but also to engage in practices consistent with it.” ― Paulo Freire, Pedagogy of Indignation

In 2016, Marcelle, coordinator of the Warm Welcome Foundation, had a dream. As social worker, she listened to neighbours with good ideas, and together they came up with plans to familiarize and welcome newcomers to the neighbourhood. The key was to do this in an accessible and warm way. That year, a large group of refugees and other newcomers came to the neighbourhood. Together with local organisations, they carry out activities to increase the self-reliance of newcomers. During the COVID-19 lockdown, they organised online programs called language café and digital buddies project, where participants can practice the Dutch language with locals.

The visiting group listened to Marcelle’s story and were inspired by the way she handled her struggles, showed perseverance and came up with creative solutions. The group asked how she motivated so many people. Marcelle says that they promote their activities in local Facebook groups. Their participants are always a mixed group of Dutch native people and newcomers with a refugee background. She says: “In the beginning, you only need one person with a positive experience that will share his or her positive story.” She is constantly and consistently looking for ways to encourage newcomers to take charge by engaging them and giving them responsibility. She sees the potential of people to use their talents, no matter their nationality or background. For example, newcomers are now trained to become activity organisers for a children’s playground. They are also planning to come together with a number of local organisations that are involved in informal practical and emotional support counselling of newcomers. “We want to show that we work from the heart and share our way of working with the municipality.”

Learning from ‘Wereldkeuken’ in Haarlem

The dream of a Syrian couple Mohammed and Lilian is to start their own Syrian restaurant. Five years ago, they fled with their three children from their country because of the war. They find it important to give a positive image about Syrian people and to help their community get rid of cultural barriers. Others might think that not controlling the Dutch language perfectly is a barrier. This couple uses their talents and qualities to create opportunities to bridge the gap between Syrians and Dutch people. They do this through their work as chefs at the World Kitchen in Haarlem. World Kitchen is a foundation where people from all over the world work together as a family, they cook the most tasteful dishes, as an ode to where they come from and as a reminder of what they left behind. This way, the couple prepares itself to open their own restaurant in Haarlem, one day.

Lilian organises voluntary activities for women in a neighbourhood in Haarlem called Schalkwijk. She likes to convey what she has learned about Dutch culture to the women in her community. She finds it important to be connected to her community and, once in a while, she checks in with them apart from the activities she organises. Two years ago, her story inspired a group of women in the eastern district of Amsterdam to found a women’s group and called it Vrouwencafé, Women’s cafe. The visiting group consisting mainly of these women got re-inspired and talked about visiting Lilian and her women’s group as soon as the COVID-19 situation allows to move more freely.

Mohammed is a volunteer at Haarlem Mozaïek, a foundation that organises activities by and for newcomers with a refugee background. They have come up with a new name to call themselves: New Haarlemmers.

Learning from ‘De VerbroederIJ’ in Amsterdam

In 2017, the municipality of the Northern district of Amsterdam organised a competition for ideas to use a neglected area. Tania and two of her friends envisioned De VerbroederIJ (loosely translated: A place for fellowship), a space where neighbours can meet, feel at home and feel connected with each other. They submitted a plan and they won. Tania says: “It was hard work, because there were a lot of obstacles to overcome in the beginning.” But, there has been a pavilion restaurant for a year now, with a large terrace, a vegetable garden and a beach with a playground for children.

The visiting group was very impressed by the number of goals that they achieved in a short time and with a small committed group of people. The visit inspired the group and gave hope to continue to believe in their dream for their own location in their neighbourhood. Watch the short video of the visit and see if De VerbroederIJ inspires you.