“All Women Aboard – Me & My Family making a new home” 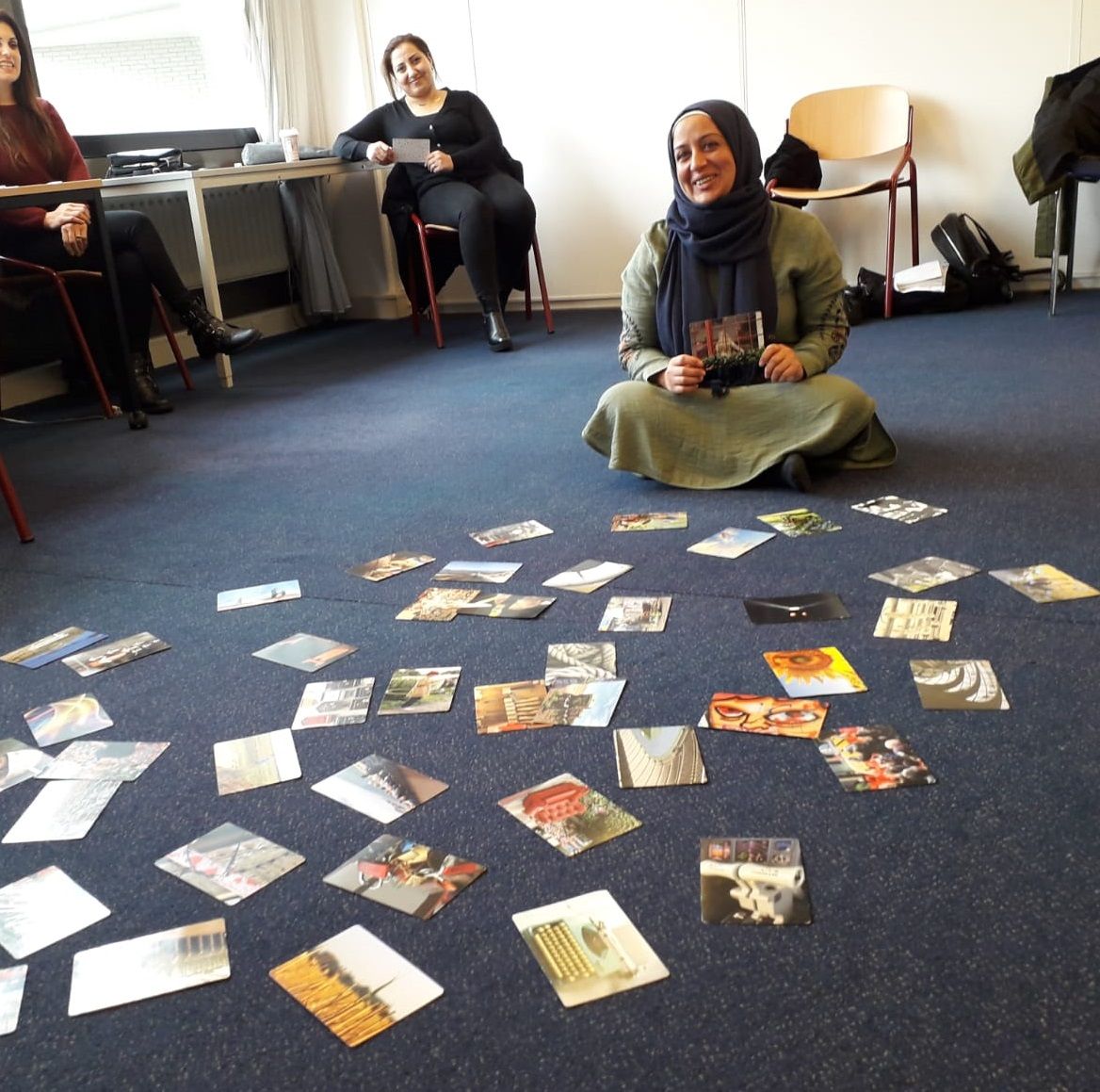 Photo: The participants of the All Women Aboard SALT-CLCP training guide us in how the training is shaped. As we were sharing thoughts and feelings, a participant proposed to sit on the floor, just as it is done in Syria. This picture shows how the atmosphere within the group allows the women to feel safe to share feelings and propose ideas. Photo courtesy of Rosa Watjer.

In collaboration with municipalities, the Dutch Ministry of Social Affairs & Employment initiated a programme in 2019 to support refugees in their integration process in the Netherlands. Our partner organisation, Implacement, began, in September 2020, a 9 months course for two groups of refugee women from Syria and Eritrea with 3 facilitators, supported by a The Constellation coach (Birgitta Schomaker). Navigating around the lockdown, they ran eleven face to face sessions in the months of September through December, every two weeks. Sessions in 2021 will continue in a format of 1 hour to 1.5hour weekly Zoom calls.

Goal: To support women refugees in “making home” in their new country and in taking charge of their future (incorporating their family members’ dreams), stimulating them to balance care for others with self-care. Career goals are considered equally valid as goals related to their roles as caretakers (mother and spouse).

Feedback and impact so far (January 2021): Participants report that they enjoy practising speaking Dutch, learn from each other and feel energised after the class. Participants have become more self-confident, more aware of their strengths, and how they can use their strengths to take steps to realise their dreams and plans (Dutch language skills, computer skills, finding a job, etc.). Participants’ outlook on the future has changed. Some of them see more opportunities in the Netherlands to pursue career goals. Others are becoming enthusiastic about the idea to get a job or start a professional education. Conversations with family members on dreams for the future are scheduled to take place in January 2021.

“Before we started with the course, I was always tired. I didn’t want to leave the house and talk to people. In the class, I feel calm and I can practise speaking Dutch. I leave the classes energised and hopeful. I started to take into consideration also my own wellbeing, not only my family’s wellbeing.”

“I am learning in the course to be self-reliant. Just staying home is not good. Meeting other people is important. I am learning from the other women. I am energised because of the course, and enthusiastic.”

“I dare to speak Dutch now! So happy about that. I am proud that I have sent an email to our family doctor.”

The Covid-19 lockdown is limiting possibilities for participants to visit public spaces, practise Dutch language skills with neighbours or other contacts. Our intention for the coming months is to keep the group together as a support system for the women and to continue translating the dreams into plans and concrete action steps while focusing on what is feasible in the current context.

Participants of the course: Women from Eritrea and Syria who had arrived in the Netherlands (with their children) to reunify with their husband who had received a residence permit. Two parallel groups with approximately 10 participants each were run, one group of Syrian women and one group of Eritrean women.

Facilitation team: The Dutch facilitator facilitates both groups, together with a Syrian colleague for the Syrian group, and an Eritrean colleague for the Eritrean group. Both groups are being run bilingually, where the Syrian and Eritrean facilitators are not only translating but also taking up their facilitation role. Joined by The Constellation coach in regular meetings, the facilitators design and practise elements of the course. The facilitation team is involved in continuous learning and tweaking of themes, topics, exercises. The three facilitators were new to their role and new to the SALT approach. They built trust by being friendly to everyone (not favouring anybody), by listening from the heart, and by establishing an atmosphere where it is safe to express feelings and personal stories.

Theory of change: The women are building a community of mutual support, to stimulate each other in taking steps towards realising their dreams in the Netherlands. Critical factors for change: growing self-efficacy, and culturally sensitive facilitation. The programme started with a focus on familiarising oneself with Dutch society by discussing differences and commonalities with the country of origin, which helps to bridge between the past and the future. Gradually, the programme evolved from an educational approach to a dream building approach, whilst increasing the shared responsibility between facilitators and participants for creating a pleasant group experience. As much as possible, guest speakers were invited who could function as inspiring role models. Often, they spoke the language of the country of origin.

The SALT approach ensures continuous testing and refining of the programme. The programme was outlined in general terms, using the Theory of Change as a compass. Based on feedback from the course (after experience reflections), continuous learning, refining and re-direction of focus and approach are possible.

Supporting refugees in their integration process in the Netherlands
Community: 2 groups of each 8 participants from Syria and Eritrea
Facilitators: 3 SALT facilitators-in-training
The Constellation coach: Birgitta Schomaker
Contract with Implacement
Place: Amsterdam
Period: September 2020 – May 2021